Mania can be a wonderful thing in moderation. I had a nice blast of it yesterday.
If I had to pinpoint one change — the biggest change — in my life in recovery, it’s that I have energy. I am interested in so many more things than when I was drinking. These interests motivate me and infuse me with life. I guess it could be construed as manic behavior, but it’s not hyper. It’s an energetic calm. I like it. It’s a gift of sobriety, and it played out nicely yesterday:
I wrote a story before 7 a.m. Then finished the overdue revisions of my book proposal. Then baked a pot of black beans. Then made homemade tortillas. Then with the kitchen back in service after a month of solitude, I went full force into Effin Artist favorites: I made a nice wheat bread with flax, paprika, chili and pepper.

I then remembered I had lost my wedding ring a couple of weeks ago in my pond. I know I lost it in the pond. The cold water made it slip off, I was certain. I had thumbed the blank spot uneasily for days, so I decided to go get it back.
I drained the entire thing and sifted the gook through my finger. No ring! I prayed for my ring while I fixed the pond all up and reworked the little waterfall to make it flow better.

Stinking like a dead fish I decided to weed the driveway, move the planters into the back yard (protected from the deer that gave them a haircut in my absence), filled the pond and while tweaking the creek found my ring!

Back inside I showered off the gook and decided I was hungry. I made homemade fish tacos. One bite and I was envisioning an Effin Artist taco truck in downtown SF charging $10 bucks for these with a line so long it blocks traffic. Wowsa. The Giants pounded the Twins while I ate. 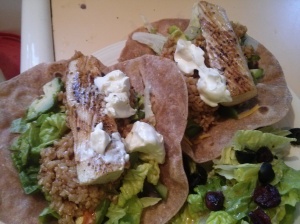 The cookies capped off the manic day along with a prayer of gratitude for both the day and my ring (and a little cheer for the Giants win).
Good days aren’t always easy to find, but a little work, a little creativity, a little prayer and a most unexpected, welcome, grateful tired ended this one. A very good day indeed.

I can’t help but write today about the greatest game in the world: baseball.

And while I am in such a celebratory mood, I’ll let my mind flow over to my other favorite pastime, making lists. When I’m bored or stuck somewhere and want to pass the time, I make lists. Any topic will do, but more often than not my mind turns to about baseball. My favorite baseball list is listing my favorite baseball parks. I’ve been to most of them. And this debate within myself goes on infernally. It’s elastic. The list changes with my mood and my emotional connection to the park. But as of now, the top five baseball parks of all time are, in reverse order:

#5) Seattle Mariners, SafeCo field. This one never stays the same. I love the skyline, the roof is a work of engineering art and it’s right downtown, which is basically a requirement for my list. If you have to drive, it’s disqualified, which painfully removes Chavez Ravine. The Brewers Stadium is fun, but also gone. The Braves.. what were they thinking… sigh, Arlington is a great looking ballpark. All disqualified. So for now it’s M’s, which is AT&T Park on Steroids, and I hate steroids, which makes me want to kick this off the list in favor of St. Louis, Pittsburgh or Detroit. The Rockpile is pretty cool ($1 tickets) and nearly makes the list on that alone. 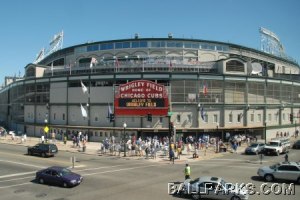 #4) Wrigley Field – Some days this has ended up #2 on my list. But that’s an emotional decision. The venerable stadium is simply a perfect place to watch a day game. The vibe, the surrounding areas, the EL and the Ivy. When drinks at the Billy Goat Tavern followed the game (a place a bartender kept open until four in the morning for just me and couple of guys) was included in the package, this topped the charts at #2. Now that I’m sober, it’s #4. Still an epic stadium.

#3) Camden Yards- Purely the most innovative, art-changing, visionary stadium in this class. It set the stage for every stadium that’s been built and single-handily destroyed the horror story that was multi-use stadiums and domes of the 1970s. If this list was “most important stadiums” Camden would be number 1. It’s a gem.

And the biggest, hardest, emotional decision between #1 and #2, subject to change in a moment’s notice…. 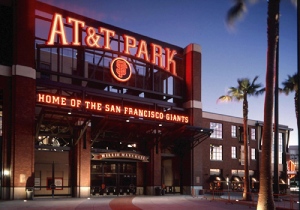 #2) AT&T Park- This stadium and the surrounding area is perfect. Crampt and beautiful with the uniqueness of the splash homers to right, Mssrs. Mays and McCovey watching the front and the back… it’s just… brilliant. Absolutely nothing beats a day game in the sun, in my beloved SF. Even when the team sucked (which people forget HOW much they sucked last decade) you can grab a $5 ticket for $3 from a scalper in the second inning and just enjoy the moment. The surrounding area is SOMA, my home, which makes it the very best. 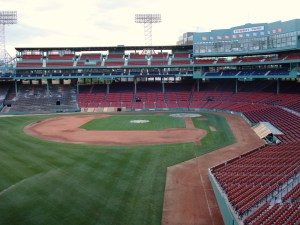 The single greatest seats in any stadium ever is upon the Green Monster. But even when you are behind a post, you are in love with Fenway. Boston is the best–by far!–crowd. The surrounding area is not AT&T standards, but it works and its near the heart of the city in Boston’s Back Bay. The stadium aura is magical. The above view is what I saw when I proposed to The Bride on Fenway’s big screen (corny, yes, but absolutely memorable). Fenway Park is the fulfillment of the Lord’s Prayer: On Earth as it is in Heaven, especially the greatest opening day ever (2005) when The Bride and I watched the 2004 Championship Banner unfurl on the Green Monster. Epic.

Want to argue? Reply below.

I’m so excited it’s like I’m a kid again. I love, love, love this day.

As my life swirled ever-deeper into alcoholism, my interests diminished as if being forced through a funnel. At the end, I kept my work, my life with The Bride, our family and little else. Fun meant Happy Hour. I did little else because supposedly I was stressed out and tired at the end of the day. I didn’t want to do anything but watch a movie and relax, which was code for have a 4 p.m. cocktail, open a bottle of wine, drink it will mindlessly watching TV, open another bottle and get a little happy until I fell asleep in a stupor. Some days it took more than two bottles. Some days the cocktails started again around closing time. Some days it was not a stupor but a blackout.

Over and over again.

Recovery is about expansiveness. Once I broke through to the other side, life became big again. Glorious. Beautiful. Artistic. Creative. Interesting. It became filled with those “Ah-ha” moments that define EffinArtists.com.

Tomorrow is part of that expansiveness returning. It’s opening day of major league baseball. It’s the one interest of mine that I have loved and participated in for decades. It brings me back to the excitement of my youth, of going to games with my children and watching them become fans, of the thrill of covering baseball and seeing Opening Day from a press box, and the rhythm of consistency every year this time of year.

The only times in my life I let Opening Day slip by relatively unnoticed were the times at the very end when the grip of addiction took its toll. I can’t tell you how happy I am today to have it back.

I won’t be in ballpark this year, but I’ll have the television on for the first games. I’ll make sure to tune in to every inning of my hometown Giants. I’ll boo everything about the Dodgers except the magic artistry of Vin Scully.

And if ever there is a picture more beautiful that the artistic symmetry of a ballfield–the grass and the dirt and the distant skyline and the Opening Day colors of bunting and banners and American pageantry–I don’t know what it is.

We celebrate life and recovery every day (or try to anyway), but on celebrations of our past and present and future like Opening Day, it is truly time to take pause and thank the heavens for small blessings.

They say on Opening Day “hope springs eternal.” On Opening Day every team has the World Series in their view. Six long months from now through the dog days of summer there will be only one champion. But on Opening Day, everyone is a winner. Hope indeed. Eternal, indeed.

PS. Not that matters but each year I predict my winners for the coming season. In my mind I want to show I stand with the legion of prognosticators on the web and hold my own. Most year’s I do. So it’s important I call my show now so I can brag, or be rightly belittled at season’s end. So…

If you are a baseball fan and want to talk trash later in the year, you better get in now with your predictions by replying below. If you don’t call your shot, don’t start talking later.

What we’re writing about

The Zen of our Dough Garden

All those times we say, "I'm an EFFin Artist, man!" – www.effinartist.com

What’s outside our door

What we are looking at

What you are saying

What blogs we read

Out of Shadow and Ash, Spirit ascends and blazes Light.

Surfer, writer, environmentalist, Dawn Pier lives on the beach in Baja, Mexico and invites you to join her in her adventures on the sea.

Encouraging Others to Encourage the World..

“Experience should teach us to be most on guard to protect liberty when the Government’s purposes are beneficent. Men born to freedom are naturally alert to repel invasion of their liberty by evil-minded rulers. The greatest dangers to liberty lurk in insidious encroachment by men of zeal, well-meaning but without understanding.” U.S. v. Olmstead - Justice Brandeis

Teaching and Learning for a Democratic Society

a former pastor's journey into atheism

One Year in Spanish

Ideas and Resources for Teaching Spanish and MFL from a Spanish Teacher using Mary Glasgow Magazines in her Classroom.

Habits, purpose and a little bit of zen.